When I first read my grandfather’s collection of Korean War letters (aka his Korean War memoir), I was surprised they were so lovey-dovey. Don’t get me wrong, my grandparents were loving, but by the time I came on the scene they didn’t really seem that in to nicknames and constant professions of love. Korean War-era Sidney Goldstein, on the other hand, was all about nicknames (he called her Beautiful, she called him Budgie Doodle), love and kisses. 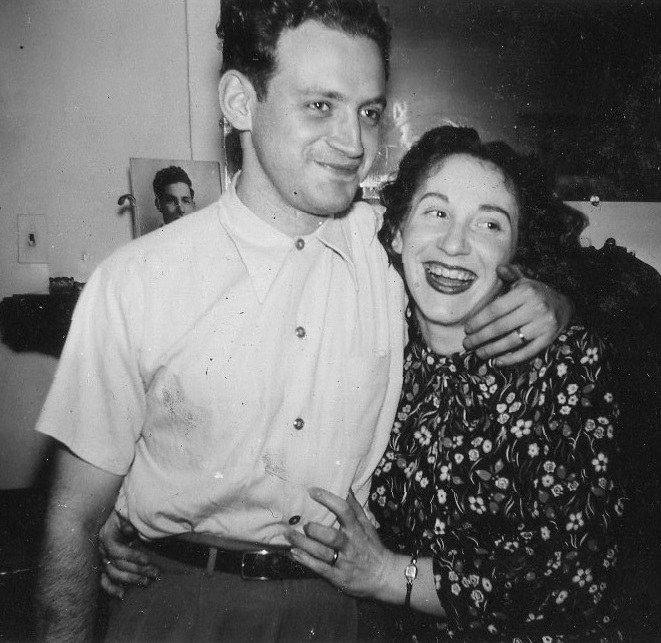 Of course, it made sense. My grandparents had only been married three years when my grandfather left for Korea, so they were still in that honeymoon phase. They were just so different from the grandparents I knew.

The grandparents I knew spent most of their time focused on my grandmother’s illness. In the late 1960s, my grandmother was diagnosed with MS. Ten years later she was confined to a motorized scooter and my grandfather, as her husband and a doctor, became her caregiver.

Over the course of his memoir, however, I got to know the young versions of my grandparents and began to see them in the grandparents I knew. The devotion they showed to each other later in life can certainly be traced back to those first years as a couple.

I got an even more comprehensive look at my grandparents’ early romance when I found love letters from when they were dating. Here is the story of those early years leading up to the Korean War:

In the late 1940s, my grandparents were both attending Wayne State University. He was there to become a doctor and she an elementary school teacher.

A school dance was coming up, but they both had reasons not to go. By all accounts, my grandfather hated to dance. My grandmother had a test the following day, so she wasn’t sure she’d be able to make it.

In the end, my grandfather’s roommate convinced him to go (“His roommate was a good influence on him,” my grandmother used to say) and studying took a back seat to dancing. A friend of my grandmother’s introduced them and the rest is history.

I had grown up hearing this version of how they met. It’s cute but there’s nothing about why they liked each other or how they felt; no little details that allowed me to imagine my grandparents as they were then. That’s where my grandfather’s love letters and Korean War memoir came in.

In one of his Korean War letters, my grandfather referred to their initial meeting.

Remember, Ruthie, how we first met at a dance and that line that impressed you most after I learned your first name? Your name reminded me of the Book of Ruth in the bible and the words “Whither thou goest, I shall go. Whither thou lodgest, I shall lodge.”

At first I was really excited to hear him refer to the day they met. Then he started talking about the Book of Ruth and it all went downhill from there. Not only did he use a cheesy pick-up line (and I never thought he’d be one of those guys), he used a cheesy biblical pick-up line. I really wasn’t expecting that.

My grandmother must have liked cheesy because she agreed to go on a date with him. Where they went, what they did—all that’s lost. But this little gem isn’t:

Remember when I tried to kiss you on our first date and you said, “But I hardly know you.”

Now there’s an adorable detail for you! Just that one line tells you so much. First, that my grandfather was pretty smitten, and second, that my grandmother thought it was weird to kiss someone she didn’t know well. Pretty good stuff.

At some point, they must have, ehem, gotten to know each other better because he signed a love letter he wrote during winter break like this:

Your little devil and baby, with all my love and kisses,

The little devil part kind of grosses me out (I don’t even want to think about what he did to earn that nickname), but it sure does embody that giddy lovesick phase of a new relationship. 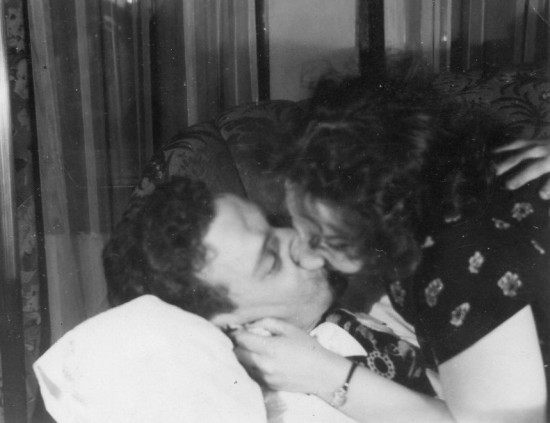 My grandfather’s caption was: Kissing on couches is all right especially if it’s right side up and on Passover when we’re full of wine.

In another letter, he teased my grandmother with a New Year’s resolution that sounded a lot like marriage plans:

To date, here are my resolutions or prayers: That God will steer me on the right path and make me see the light concerning any big steps that I might undertake…

By February 14, 1948, they were engaged. He wrote this poem in a Valentine’s Day card, changing the “With Love to My Wife” on the front of the card to “With Love to My Prospective (or Bride-Elect) Wife”:

One day the brightness seemed brighter

The air was no longer transparent

Everything in the air and on the ground sang

Happiness and understanding penetrated the void of 23 years

There was the feeling of belonging and being belonged to

There was the feeling of caring and being cared for

There was the feeling of importance and being proud of someone

Oh! There was just a fine and noble feeling

I looked upward: Thank God it had come 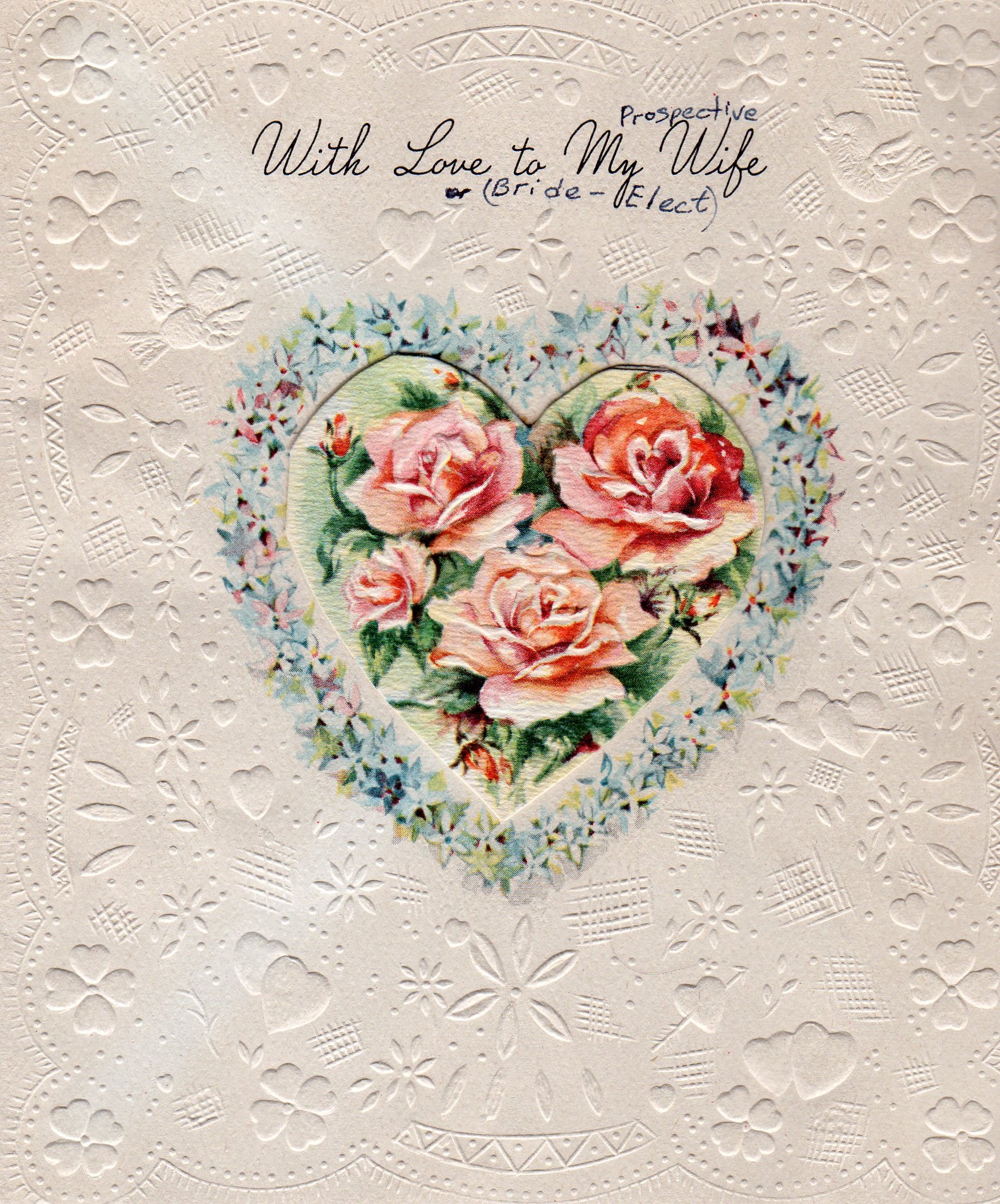 Okay, that was pretty cheesy too, but I have to give him points for writing a poem. A really sweet, heartfelt poem, that just so happens to be oozing with cheese.

An important tidbit emerged in there too. I’m pretty sure he was implying that they first met in November of the previous year, which would mean they only knew each other four months when they got engaged. It would also mean that he was signing his letters with love and kisses just one month after meeting. Hmm…no one ever told me they moved that fast. Would have been nice to know when everyone was telling me I was getting married too soon. But that’s a story for another day.

My grandparents married on June 20, 1948 and graduated from school a year or two later. In 1951, my grandfather was in his first year of residency and my grandmother was teaching elementary school. That’s where they were in their lives when the Korean War separated my grandparents, and my grandfather went back to expressing his love for her on the written page. 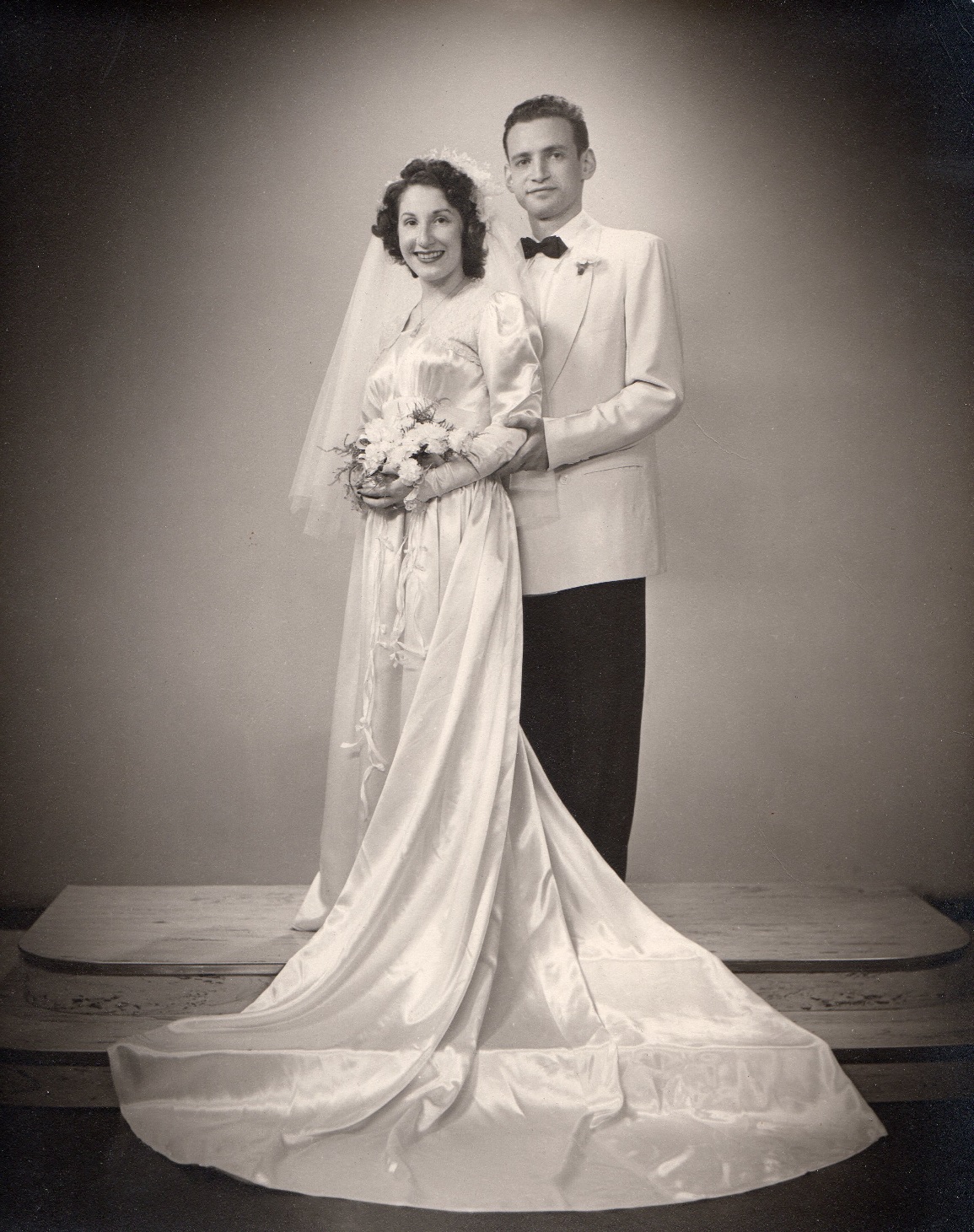