Nurture and Nature Both Play a Role

Libby Atwater is a friend and fellow personal historian. She recently came out with her first memoir, What Lies Within (which just won the Royal Dragonfly Book Award in the biography/memoir category), and is already at work on her second, What Took You So Long? Libby was adopted at birth by a nice Jewish family. Years later at the age of 56, she was ready to find, meet and get to know her birth family. I asked her to write a guest post exploring the things she had in common with both families. You’ll find her post below.

Ten years ago I celebrated my 35th wedding anniversary with my husband, Don, sons Darryl and Ross, and daughter-in-law, Kendi. I had a loving husband and two wonderful sons, and was a successful writer, but something was missing from my life. I pondered whether it was time to research my roots. 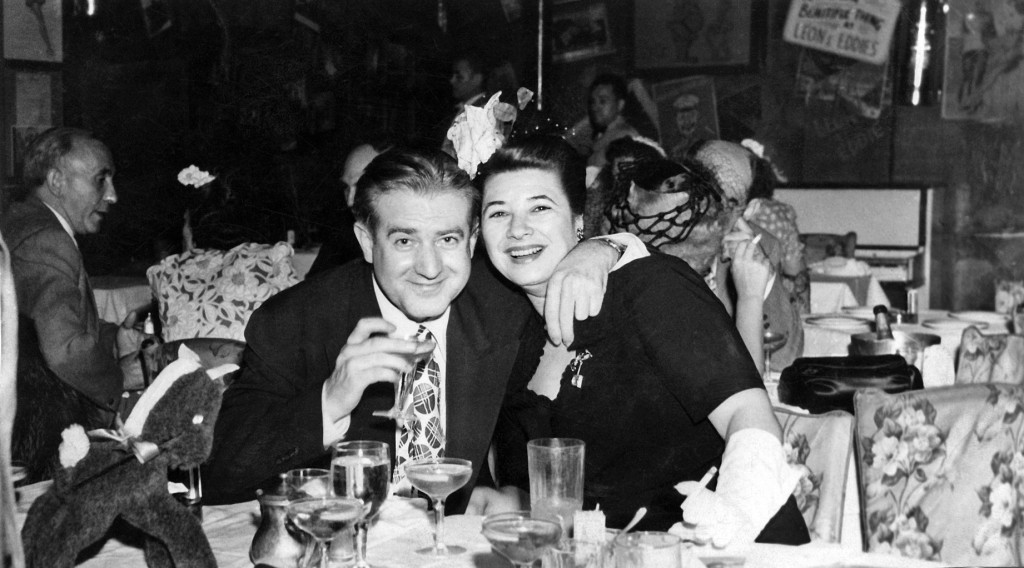 Adopted at birth and informed at age two, I forgot this fact until a mean-spirited classmate taunted me with it in sixth grade. My older Jewish parents, Ruth and Harry, confirmed my classmate’s taunt and assured me that they were my parents. But Ruth and Harry died when I was a teenager, and my sister Blanche, four years older and also adopted, disappeared from my life in 1979. Much of our family history left with them. 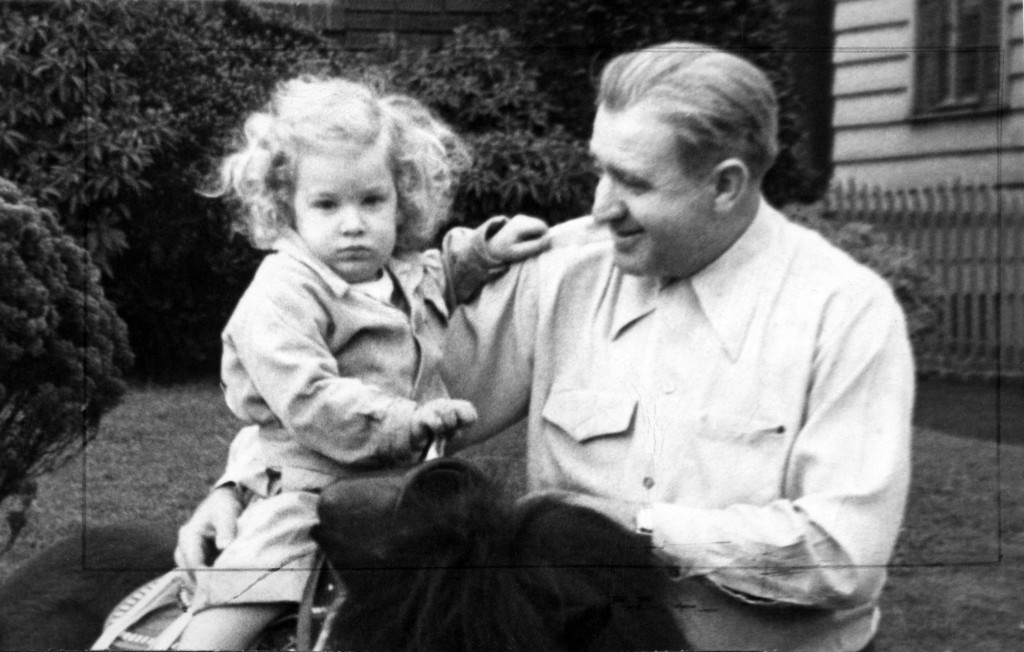 A young Libby with her dad, Harry

Now our son Darryl planned to start his own family. He knew our family’s health history, but no one knew mine. It was time to find my birth family at age 56.

I rummaged through my late parents’ papers and found my original birth certificate. Armed with my birth mother’s name, I contacted six people I found online whom I suspected might lead me to my family. Within an hour, I received an email from Jerry, the person I thought might be my brother. He was shocked when I told him why I needed to contact Angela, who was listed as my birth mother. My birth family was Italian and practiced omerta, a code of silence. Jerry promised to get back to me.

The following day he called with this news: I had a mother, brother, and sister who wanted to meet me. Jerry was my first cousin, and I was the long-lost baby given up at birth. Only six people knew of my existence until that day.

That evening I spoke to Angela for the first time. Our lengthy conversation began awkwardly, but once we warmed up it lasted almost an hour. Towards the end, she asked, “When can we meet you?”

Two weeks later I boarded a plane and headed east to meet the family of my birth. My brother, John, had called daily since we first spoke, and he’d emailed family photos so I’d recognize them. In the terminal stood Angela, an olive-skinned, petite woman with black hair and hazel eyes; my sister, Barbara, a pretty blond with hazel eyes; and John, whose striking white hair contrasted with his huge, sparkling brown eyes.

During my four-day visit, they plied me with questions, fed me abundantly, and introduced me to my large extended Italian family by giving a welcoming party. I felt like I was in the scene from the movie Antwon Fisher in which his father’s family throws him a huge party to welcome him back. 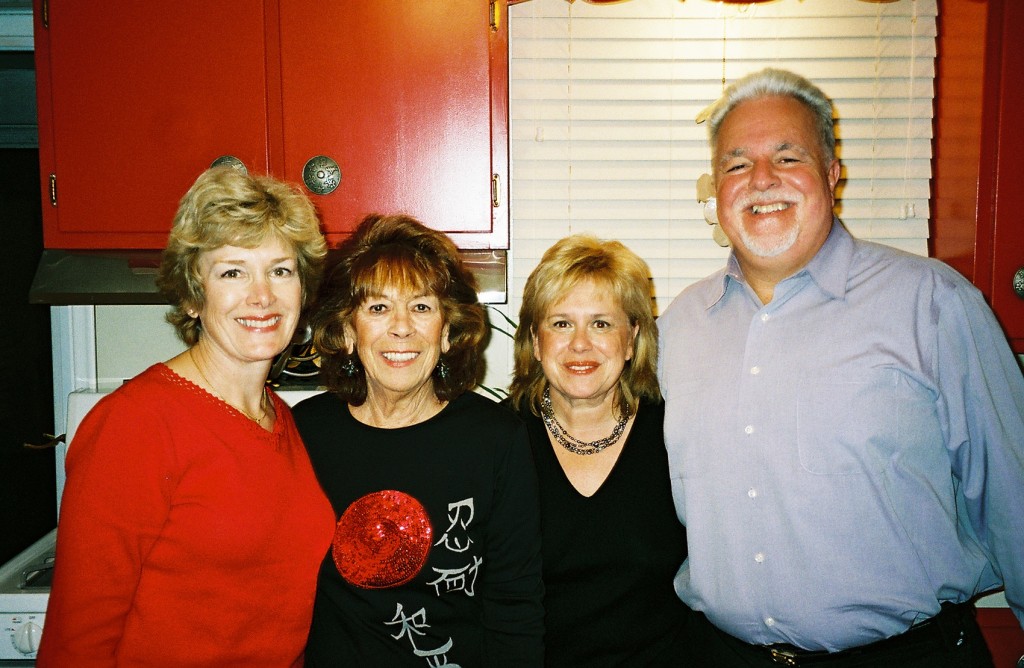 From the day Libby met her birth mom, sister and brother.

I learned so much on that first visit. My parents were 15 and 16 when I was born, and my grandfather insisted that I be put up for adoption. He arranged to place me through a family doctor.

When Angie became pregnant with John nine months after I was born, she and Bob married. They remained married for 55 years and had more children, one of whom died at 13 months old.

My mother said I looked like my father who’d died only 13 months earlier. I shared his stature, thick, wavy blond hair, daily apples, love of rock and roll, quick temper, kindness to strangers, and his determination. My looks belied his Dutch-German heritage, as did Barbara’s.

I have Angie’s mouth, literally and figuratively, as when colorful language bursts forth; her hazel eyes, love of fashion, and her resilience. We both become nervous when we entertain, get upset easily, and are sensitive. She still sleeps with the covers pulled over her head, as I did as a child. Neither of us would leave home before we did our hair, applied makeup, and dressed appropriately.

John and I were 17 months apart, yet more like Irish twins. He had dark hair in his youth and favored the Italian family, as our son Darryl does. When he first met Ross, our younger son, I saw a striking family resemblance. John and I both enjoyed books, movies, good food, dogs, travel, and most of all, our families. We planned to write a book about our childhoods called Parallel Lives, but sadly he died suddenly in 2010.

Barbara has a positive outlook, can-do attitude, and cooks fabulous food. She teaches school, as John and I both did before embarking on other careers, and possesses more patience than anyone I know.

Meeting them brought up many questions from my birth family. My Italian Catholic mother could not understand why her father placed her firstborn with a Jewish family only five miles from their home. I explained that my two families were more alike than different and why my early nurturing played a huge role in the person I’ve become.

Ruth collected antiques and taught me to appreciate music, the arts, history, and books. Her superb cooking and baking led me to enjoy food, and her devotion to family and friends made her loved by all.

Harry had a generous spirit, helped others find work, and took us on Sunday family outings. He treated others well, as did Bob, who would help anyone in need.

Both families shared similar values. They were generous, despite different incomes, valued their families, education, religions, music, and good food. They both kept secrets and might be chagrined by my tell-all. Most of all they both wanted the best for me, as most parents do.

Libby J. Atwater has been telling stories other people’s stories for 25 years and decided it was time to tell her own. Her memoir What Lies Within is available on her website, www.chooseyourwords.net and through Amazon and Apple. This blog offers a glimpse of its sequel What Took You So Long?