Don’t Let This Happen to You: How Twilight Almost Tainted a Family Tradition

I have never read any of the Twilight books or seen any of the movies, but on principle I don’t like them. I’m sick of plots that revolve around a woman needing to be rescued, and I don’t understand why people think Robert Pattinson is attractive (note: “What do you mean? Just look at him,” is not an explanation). Still, I didn’t go out of my way to dislike the series. I was indifferent at best. That is, until Twilight started calling attention to itself.

You see, I am a Twilight Zone fan. In the past, when I provided people with this information, it would lead to a very pleasant discussion on our favorite episodes. But an increasingly disturbing trend has emerged in recent years. I’ll be in the middle of saying something completely innocuous like, “I love the Twilight Zone,” and I’ll be interrupted with, “Yep, you and 50 million other girls.”

What? I know Rod Serling was pretty sexy (because in addition to being handsome, he was a talented writer, snappy dresser and had a great speaking voice—and that’s how you explain someone’s attractiveness, Twilight fans), but I don’t think that’s the show’s primary fan base.

I grew up watching Twilight Zone holiday (July 4, Thanksgiving, Christmas and New Year’s) marathons. It was one of my favorite family traditions. No matter whose house we were at, year after year we’d gather in front of the TV to watch a gremlin taunt William Shatner from the wing of a plane and Burgess Meredith accidentally smash his glasses over and over again. And it never grew old because, for the most part, the stories had a timeless quality. Ultimately, they were about human nature and strange things happening, subject matters that will always be applicable. 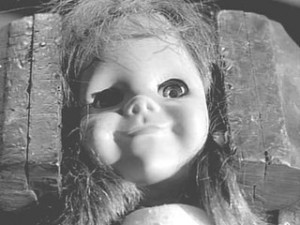 Even at a young age, the stories were relatable. So many of them were about feeling powerless and frightened, something any kid can identify with. It was reassuring to hear other people struggle with doubts and uncertainty, to know that other people shared the same thoughts. The show introduced me to irony and fostered a love for dark, psychological tales. And even when a story scared me, I felt safe surrounded by my whole family. (Well, except for the Living Doll episode. I still make a beeline for the door the second I spot a doll in the room. You never know when one is suddenly going to want to kill you.)

I’ve recently discovered that most of my extended family grew up watching and loving the Twilight Zone too. I like to think this is because my family is genetically predisposed to probe beneath the surface and search for the deeper meaning in life. Or maybe they just have good taste. Whatever the reason, it is something I am happy to have in common with them.

So my point is, when I say Twilight Zone, I mean the TV series with Rod Serling that aired from 1959-1964. Twilight Zone, as in another dimension, a dimension not only of sight and sound, but of mind. The Twilight Zone that remains relevant and will outlive the pop culture references, teenage angst and popularity of Twilight. Yep, that Twilight Zone.

Posted on December 28, 2012 by Rachael. This entry was posted in Nostalgia. Bookmark the permalink.