Don’t I Know You From Somewhere?

My first day at my new post, Ft. Custer, Michigan, is at an end and I’m tired, tired, tired. The bones, muscles, skin—even brain and little toes—are protesting. I must have walked thousands of miles and wandered into every building ever erected by man. Then missing you crushed my spirit, made me feel lonely despite intense activity.

Where did my unwilling legs propel me? It seems that the army wanted me to “sign in” at five different places just to make sure my twin brother (no such character—one’s enough) doesn’t get in the act. Then there was travel pay, uniform pay, and pay in general. I was urged fairly often to “sign here in duplicate” and I heard the aggrieved and shocked words of the clerk, “What, you don’t have a middle name?” For such derelict an omission I expected at any moment a harsh bureaucratic response.

Anyway, I dashed to the Quartermaster for several officer’s uniforms, a dress hat, and an Eisenhower Jacket, rounding out my dashing wardrobe at the Post Exchange with five sets of First Lieutenant bars. 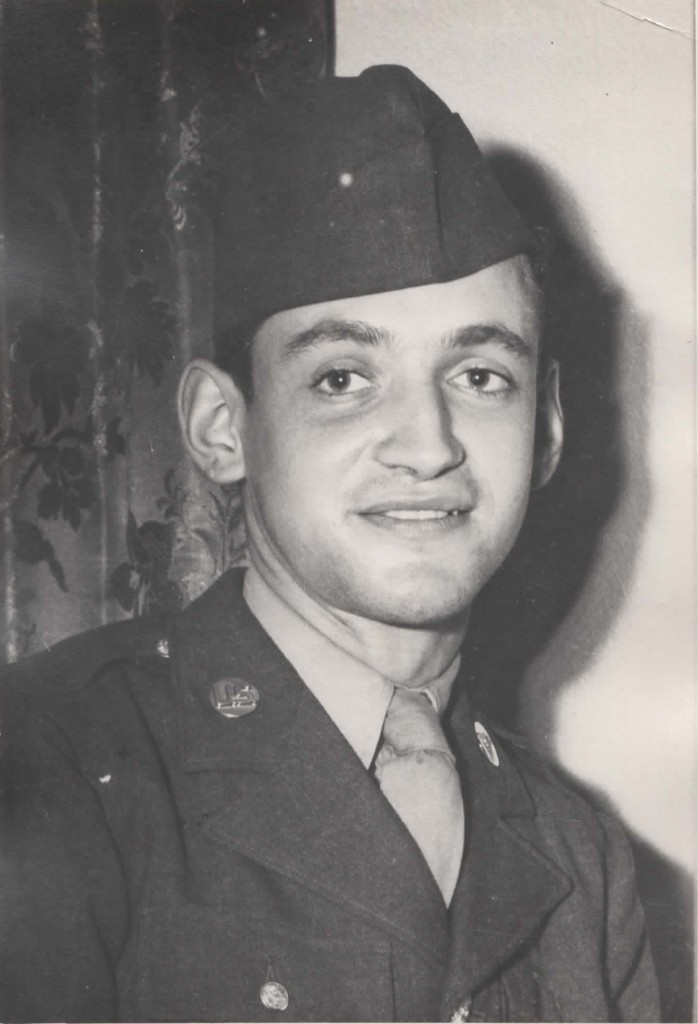 Just as I was about to search for stationery and stamps (to write to my beautiful wife, of course), my staff sergeant wanted to show me the dispensary, followed by the colonel wanting to say hello, followed further by the tramping feet of privates wanting to track down a room for me. Everybody wanted to do something and I just wanted to rest!

After all these feverish stirrings, I learned that five hours had gone by, and no kidding, I was so tired that I actually wondered how it would feel to collapse inside a mud hole to fit the occasion.

ODDS AND ENDS AND STUFF –

(1)  The army has acted resoundingly: my official name is now Sidney NMI Goldstein—NMI stands for No Middle Initial.

(2)  Working hours are from 8-12 and 1-5 weekly and 8-12 on Saturday. That means I’ll head for Detroit every weekend, providing I don’t draw OD (Officer of the Day). Wouldn’t that be a delicious treat?

(3)  I’m supposed to be the battalion surgeon in charge of 1,500 men and 1,000 of them will receive typhoid and tetanus immunization shots tomorrow. I dare say another weary day is in the offing. 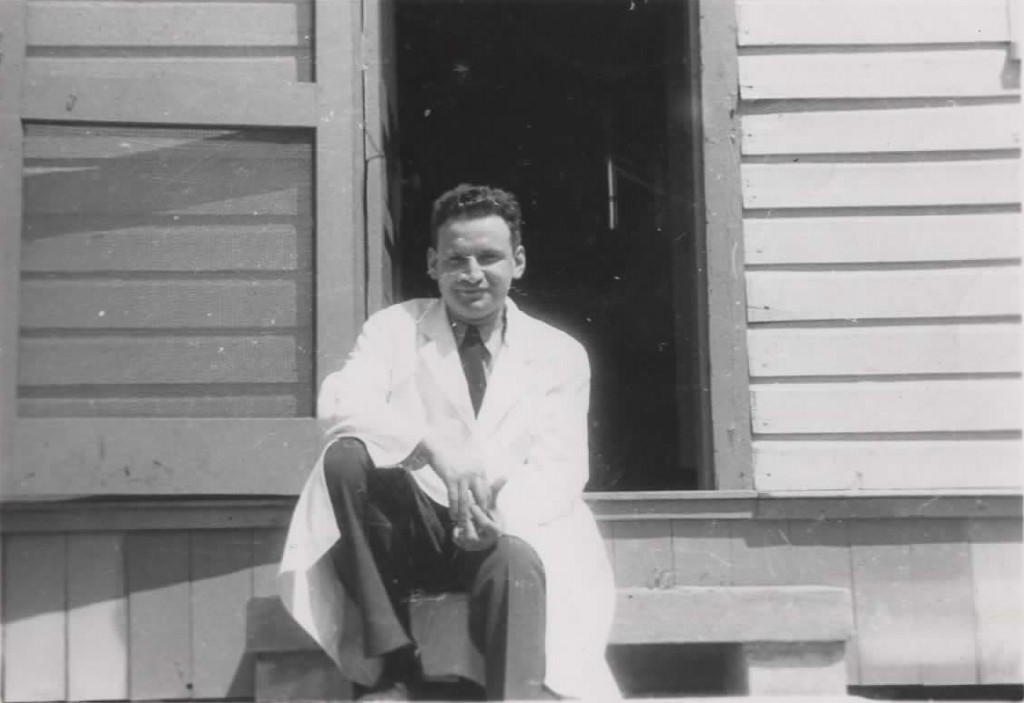 (4)  The Colonel and the other officers have also stated I am due to stay here a long time. How do they know? I just got here. “Heh, Sid,” I admonish myself, “don’t be a killjoy. Just believe.”

(5) Since I have rooms in the BOQ (Bachelors Officer’s Quarters), I’m guaranteed a date with a pretty nurse every night. To be more specific, I have a male roommate together with a bed, desk, closet, clothing rack with hangers and a wash bowl. Now, if I can only find a mirror, I might even shave in the morning.

While writing this letter between 6:40 and 7:40 p.m. I heard a familiar chant outside my window – “Hut, two, three, four.” At this late hour some soldiers were actually marching through all this mud. Come to think of it, I better not complain too much.

Now that my long tale is almost over I’ll say: I miss you and love you very, very much, and multiply that by twelve.

You know that moment when someone walks in the room, and in that microsecond before your brain catches up to your thoughts, you murmur to yourself, “Hey, he’s pretty cute” or “There’s something special about that one,” before realizing that it’s your husband or good friend or some other person you know really well? Usually this happens when you’re not fully paying attention; you look up too quickly and suddenly you’ve transformed a familiar person into a stranger. And because he’s a stranger, you size him up anew—the gait, the shape of the face, the eyes, whether you think he’s attractive (hopefully you do if it’s your spouse). Then just as quickly, you realize who it is, and as the familiarity returns, you’re surprised, amused. Of course it’s your husband, your friend! Who else would it be?

That’s kind of what it’s like when I read my grandfather’s writing. At first I slip into the story like I would with anything I’m reading. In this particular passage, I get caught up in hustle-bustle of the action and the details that make you feel a part of the narrator’s day. I like the way the pacing of the writing moves at a frenzied speed while still allowing for reflection.

But the voice is so familiar, so characteristic of my grandfather and family, that just as quickly I recognize the narrator. Ahh, of course it’s my grandfather, I realize, as his humor and flair for the dramatic pop up. No matter how mundane the event, he sets the scene like a novel. “I must have walked thousands of miles and wandered into every building ever erected by man.” Of course he’s “tired, tired, tired” rather than just plain old tired. It’s not enough to mention his protesting bones, muscles and skins, there’s also his brain and little toes too.

Because I’m his granddaughter, I also know that while he’s poking fun at the inanity of the process (my favorite part is the middle name debacle), he was genuinely aggravated. He hated when something seemingly simple became a hassle, an attitude he passed down to my mom, and to a lesser degree (I hope), me. And he certainly didn’t like being surrounded by commotion. Driving in San Francisco with him was not a pleasant experience for anyone. The combination in itself was probably enough to make him tired, tired, tired.

Then there’s the grandpa I didn’t know; it’s these sentences that are often the most exciting. Had he not thought about me, or at least the potential of a me, I would never have known how sweet and lovey dovey he was with my grandma. This is not to say that they weren’t sweet to each other when I knew them, but they weren’t lovey dovey, at least not in the way you are when you’ve only been married three years.

In some ways, they remind me of me and my husband when we were first married (particularly the nauseating part, my friends like to tell me). But even we never multiplied how much we missed and loved each other by 12. It’s cute and silly even though it makes my grandfather sound like a 13-year-old girl.

I suppose no matter how well you know someone, there’s still room for surprise, unfamiliarity. Though most of the time, when the surprise dies down you realize it’s not quite the aberration it appeared to be. It was always your husband turning the corner, it was always your grandfather with the dramatic turn of phrase and irascible wit. On the other hand, sometimes your grandfather turns out to be a 13-year-old girl. But only in the best possible way.

Posted on April 24, 2013 by Rachael. This entry was posted in Korean War Memoir. Bookmark the permalink.

A nice revamping of Sandbox theme for Wordpress